Several different schools of thought have emerged from such or studies. This includes some of the following theories:

Professional managers should be aware of the development of practice ideas in their profession. It is important to be familiar with the above alternative approaches and more because they can provide you with varieties perspectives on your work. They can therefore help you to develop a better understanding of your job and thus to manage more effectively. They may also help towards better appreciation of different views held by managers in your organisation.

Alternative management approaches may also help you towards a better appreciation of different views on management. The latter Monitor and manage the quality of the provision of care services.pdf min approaches listed above tend to build on the ideas developed in the earlier ones. As you assess each approach – You might look for evidence of ways in which that which later approaches built on the strengths of their predecessors, while rejecting the weaker aspects. Once you’ve reflected on these approaches you may consider your own approach to management.

Around the turn of the century, Frederick Taylor and others began trying to apply scientific approaches to management rather than the rule of thumb approaches that was current. They therefore brought the skills of observation, quantification, analysis, experimentation, and evaluation to management in place of the more traditional approaches of institution, opinion, and guesswork. The work of Frederick Taylor and others therefore gave rise to approach, known as scientific management.

The process approach to management owes much to Henri Fayol’s assessment at the beginning of the 20th century. Fayol focused his attention on the things that a manager does. Fayol’s views included the assertion that to manage is to forecast and plan, to organise, to command, to coordinate and to control.  Almost a century later, this analysis still forms the basis of arguably one of the most popular views of management, so much so that is often called a classical view. It is also widely known as the ‘process school’ because it views management as a process, and it examines the component parts of the process separately.

The human relations approach was partly as a reaction against the seemingly impersonal features of the scientific approach, but mainly because research studies during the previous two decades had demonstrated the importance of good human relations and the influence of social factors on workers motivation.

These related ‘Hawthorne studies’ driven by supporters of human relations approach can be viewed as a milestone in the evolution of management ideas. An important observation made in the Hawthorne human relations approach studies was the output of morale went up every time management varied working conditions, regardless of whether the change was for better or worse. The inference drawn from this was workers respond positively whenever management appears to be concerned with their working conditions. This important finding is known as the ‘Hawthorne effect’.

The systems thinking approach was developed concurrently with the quantitative approach and emerged quite evidently during the 1960s and 1970s. It is an approach which emphasises the interrelatedness and interdependence of the parts and the way in which contributes to the functioning of the whole. It is not you. It’s not unique to management thinking, having been applied to problems in many scientific fields. However, it provides a helpful way of looking at the many management problems, particularly those concerned with organisations.

The term ‘system’ can mean the way of working and organising work according to certain procedures; ‘structures’ and has a looser meaning as well as meaning the framework and patterns of relationships which people have with one another. The system approach recognises that there are often several competing tensions: within people themselves, between different people and between people and organisations. Current management practice also recognises that discrimination against people may occur for a wide range of reasons such as gender, race, sexual orientation, age, culture and more.

If we reflect on the notion of interdependent systems in terms of the human body, which we know contains a variety of systems. If a major system such as that of blood circulation breaks down completely, the body simply will not function. However, if the system is operating at less than the optimum efficiency the body will continue to function, but not so efficiently as before. Problems affecting systems may be minor. To be major or minor, for example, an obvious major problem is a serious malfunction of the heart, since this will affect not only the function of the circular system, but the function of the body as a whole. In contrast, some minor injuries might be seen as a relatively minimal problem, particularly in comparison with the effect of a serious malfunction in the heart.

The Social Care Common Inspection Framework (SCCIF) for independent fostering agencies provides an example of systems related management practice, under 5.3, the effectiveness of leaders and managers. For fostering agencies to achieve a good standard of effective management Ofsted may therefore require evidence around:

The education Trust Research (2018) highlight that ‘social service systems do not exist in isolation and are constantly interacting with other systems. In the context of child protection, examples include the justice, social welfare, education and health systems (Delaney et al. 2014: 13)’. However, it also sates ‘as different systems exist alongside and interact with each other it is important to establish clear boundaries for each system, and define its structures, its functions, the necessary capacities, and resources to enable it to operate in an optimal way, and the manage the governance of the system. This promotes greater accountability: if the different actors know what they are responsible for then it is easier to hold them to account (Delaney et al. 2014: 14)’.

HELPING CHILDREN COPE WITH A DEATH

Behaviours in groups or by individuals, motivations, staff development within the organisation and their receptivity to new ideas and change are areas that can be observed. Managers who take on the organisational behaviour approach may be trying to create an environment in which learning and personal development takes place and staff training and coaching are encouraged and provide benefits in output and quality.

This people centred approach influences many of the activities carried out by Managers, including motivation, management style, consultative processes, team building, job design and training. However, some criticised the approach as putting too much concentration on the process and too little emphasis on the outcomes of the work. Nevertheless, the organisational behavioural approach considers the organisational structures within which people work and investigates the structures in relation to: 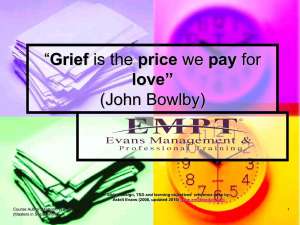